A tribute to our members whose spirits live on in our hearts. 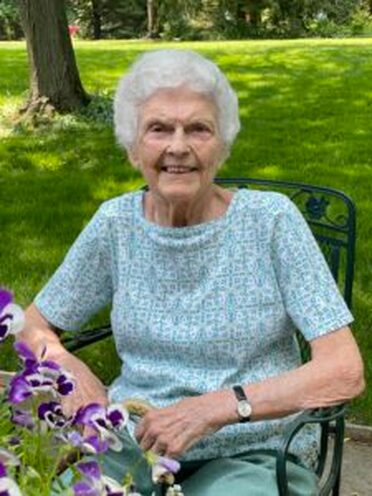 Rose “Posey” Randall
Rose Johnson Randall, affectionately “Posey” to all, passed away peacefully on 9/24/22 at the age of 97. She was born in Baltimore Maryland in 1925 to Rose Haxall Johnson and Dr. Robert W. Johnson and continues to be loved and cherished by her four children – Deborah, Peter, Julia, and Susanna, their spouses, six grandchildren and two great grands. Posey attended the Calvert and Bryn Mawr Schools and the Foxcroft School in Middleburg, Virginia, where she was Captain of the Foxes. She earned her BA degree in Biology and Chemistry from Bryn Mawr College. She worked for five years in pharmacology research at the Johns Hopkins School of Public Health and at Washington University in St. Louis where she was co-author of a seminal paper on a lab procedure which became so widely used, it continues to be the most cited scientific publication in the world.
During her post college days, Posey joined a ski trip to Stowe VT with her brother Jerry and a cohort of fellow students at Johns Hopkins Medical School. Upon breaking her leg, one of the budding doctors volunteered to accompany her on the train back to Baltimore and thus began the happiest, most rewarding adventure of her life. Peter Randall and Posey were married on May 1, 1948, and it is the partnership created that day and the family that ensued which became Posey’s greatest joy.
After Peter’s medical residency in St. Louis, the Randall family moved back to Chestnut Hill and into the family home on Laughlin Lane. While Peter advanced his medical career, Posey covered the home front. With patience and a firm hand, she navigated all school, church and extracurricular activities. She found a cohort of friends through her work with the Wissahickon Garden Club, St. Paul’s Church, and Bryn Mawr College. She was an excellent tennis player, and enjoyed her regular tennis group on Wednesdays. She also pursued her talents in financial management by volunteering during tax season for H&R Block, serving on the Board of Stratton Management Company, and especially enjoyed meeting with her casual investment group of friends. In her retirement years she volunteered at the Wissahickon Hospice.
Laughlin Lane became the launching pad for many family adventures and “projects”. After Church and Sunday lunch with Granny Min, Sunday afternoons were always dedicated to trips to Hawk Mountain, the Ringing Rocks or the Art Museum, and regular hikes in the Wissahickon.  Multiyear family projects included building and outfitting a life-size replica of a clipper ship in the backyard and filling the basement with an extensive landscape for HO trains that included a mountain, a farm, a town and train depot. Every winter, we created a forest in the backyard with discarded Christmas trees to shelter the birds who came to our feeders. There were work crews too – planting the vegetable garden, picking beans, raking the leaves, trimming the hollies, and cutting the ivy. Laughlin Lane was a gathering place for neighborhood kids and center of extended family holidays and celebrations. Posey was the overseer and the consummate host. Peter may have created the map, but Posey steered the ship, looked after the crew, and kept the boat afloat.
Outside the home, Posey and Peter planned several family adventures starting with our first camping trip across the country in 1961 (when the youngest was 5) visiting National Parks throughout the American West. We learned to work as a team pitching camp and breaking it down in the middle of the night at the slightest drop of rain. We learned to build fires and cook on a camp stove. We learned to read maps and climb mountains and most importantly, after spending hours upon hours traveling in the car, we learned how to get along.
Many more camping trips were interspersed with sailing adventures in the Caribbean, Alaska and the friendly waters of Narragansett Bay. Summers were spent in the Shack in Saunderstown RI where Posey was not allowed in the kitchen. Dad would cook scrambled eggs with olives and okra for breakfast, and the kids took turns making lunch and burning dinner until Posey couldn’t stand it, and took over the reins. It was an idyllic summer retreat where we continue to gather with friends and family.
A highpoint and important part of Posey’s life was traveling with Peter and accompanying him on many of his medical trips and missions abroad. Medical conferences and meetings offered adventure and the companionship of other doctors’ wives many of whom became lifelong friends. Posey was a bright, voluble companion who was full of cheer and could light up a room. She also traveled with Peter to remote medical hospitals and clinics in India, the Middle East, and Southeast Asia where she stepped into several roles – as nurse, scheduler, registrar and provisioner. Her expertise in science and medicine, her management skills and drive enabled her to address whatever problems or needs arose.. She was able to use her talents, intelligence, and compassion to help many children and families in remote and desperate places. Being able to participate in these trips was a very meaningful and substantive part of Posey’s life.
After Peter retired, they moved to Foulkeways and continued to travel all over the world while returning every summer to Rhode Island.  After Peter died, Posey kept up with their friends and family and lived with the comfort of knowing that they had lived a good life of happiness and charity and that together, they had seen the world with their dearest friend and the love of their lives. 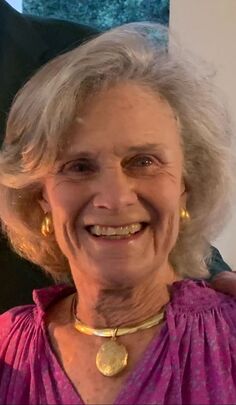 Susan H. StanleyStanley,
​Susan H. (nee) Hine (April 15, 2022).
Wife of Peter G. Stanley.  Mother of Susannah S. (Chris) Ewing and Elizabeth “Lecia” S. (Rick) Jordan.  Grandmother of Richard E. “R.J.” Jordan, IV, P. Nolan and Maya E. Ewing and the late Susan E. “Lily” Jordan.  Sister of the late Linda H. Peake.  Susie was a graduate of Springside School and Bennett Junior College. As a gifted flower arranger, she was a lifelong devoted member of the Wissahickon Garden Club and an outside member of the Trustee’s Garden Club of Savannah, GA. Susie was also co-owner of Two Susan’s Boutique in Chestnut Hill.  Susie loved spending time at their second home outside of Savannah at The Ford Field and River Club, spending time with friends at Sunnybrook Golf Club, spending summers on Lake Winnepesaukee in New Hampshire, horseback riding, biking, yoga and cooking for her family, but most of all she loved spending time with her four grandchildren, her daughters and their families, and Peter, her husband of 57 years.     Relatives and friends are invited to her Memorial Service, Friday, April 29th at 1:00 PM in the Church of St. Martin-in-the Fields, 8000 St. Martin’s Lane, Phila., 19118.  In lieu of flowers memorial contributions in Susie’s name may be made to Eric’s Camp Fund P.O. Box 8138, Prairie Village, KS  66208 or online at patsy@ericscampfund.com.


​
Memories of the Garden Club Members who are honored by named Wissahickon Garden Club Awards.
These memories are a compilation from:  Ann Hunter, Anne Coste, Anne Boenning, Posey Randall, Joly Stewart and Ginny Simonin and summarized by Maryalice Cheney and Carolyn Adams in the Spring of 2020.

Penelope (Penny) Ashmead (Mrs. Duffield Ashmead III) was President of Wissahickon Garden Club from 1978 – 1980.  She lived for a period of time at 8206 Ardmore Avenue, Wyndmoor.   Penny was her nickname and was named for President Lincoln, who is on the penny coin.  Penny was a tour de force, who delegated beautifully, had a business-like mind and was extremely organized.   She had a LL Bean canvas bag for every volunteer organization that she supported.   Penny carried all of her meeting materials for an organization in a specific canvas bag.  Penny’s mother was Mrs. Morris Merritt, who wrote Mrs. Merritt’s prayer, which the WGC recites in its September and June meetings.  In addition to being a “doer,” Penny excelled at miniature arrangements.   Penny was very active with the PHS Flower Show.  In 1983, Ginny Simonin won the Penelope Merritt Ashmead Award for outstanding miniature arrangement in the PHS Flower Show.   Ginny still has the silver tray from 1983.  Penny is a first cousin of Ann Hunter, who wore Penny’s wedding dress as her own wedding dress.  The Penelope Ashmead Award bowl (with the date of 1905 on its bottom) that WGC is retired in 2020 was given back to Ann Hunter, who will send it to Penny’s daughter.  This award was first given in 1983 and is given to a member who best exemplifies Penny’s leadership and dedication to WGC activities and whose involvement extends into the community.

Helen Sims (Mrs. John H. Sims) is one of WGC ten founding club members.  She died in 1942.   She was an excellent horticulturist and possessed a great eye for garden design and plant material.  She was a long term member of the Visiting Gardens Committee.  Thus in 1953, the Helen Sims Award as created to recognize a member’s well designed garden.  She was a lovely and kind lady by reputation.  She lived for a period of time on Gravers Lane.

The Pemberton Cup is named for Anita LeRoy Shaw Pemberton (Mrs. Clifford Pemberton).   Mrs. Pemberton lived at 235 E. Evergreen Street, 26 Summit Street from 1915 – 1941 (same home/property as our current member Maryalice Cheney lives in) and at 190 E. Willow Grove Avenue.  Mrs. Pemberton (per Anne Boenning when she joined the club in 1947 one always called her Mrs. Pemberton) was a great horticulturist.   She was an active member of the Visiting Gardens Committee as she had a great eye for garden design and plant material.  She did not hold any leadership positions in the club.   She was a humble person who had a lovely small garden.  She created nice garden plans for the Club’s entries into the PHS Flower Show.  Per her January 22, 1980 Philadelphia Inquirer obituary, Mrs. Pemberton attended the Academy of Fine Arts and she worked in the studio of James McNeill Whistler in Paris.  She died at the age of 103 in 1980.

McCurdy Cup is named for Mrs. Idella McCurdy (Mrs. Aubrey McCurdy).  Mrs. McCurdy was a long time resident of Chestnut Hill living at 7315 Elbow Lane.  She joined the club in 1937.   She was a lover of horticulture, her home and garden.  She was kind, gentle and a natural teacher of all things related to horticulture.  Anne Boenning described Idella McCurdy as “an encyclopedia of horticulture the go to person for any horticulture question.”  She was generous with her time and so many benefitted from her knowledge.  The Cup is awarded to a member of the club to acknowledge her excellence in horticulture and also her contributions to the club.

While no club award is named for her, a brief contribution of Posey’s is documented for historical purposes. Posey Randall (Mrs. Peter Randall) joined Wissahickon Garden Club as her Mother in law, Edith Randall (Mrs. Alexander Randall) was a member and a past President of WGC.   To quote Posey: “I did not know anything about gardening”.  Her mother in law told her to join and she followed what her mother in law said to do.  Posey was President of the Club from 1970 to 1972 and she is responsible for WGC becoming a 501 3 © organization during her presidency.   Posey celebrated her 95th birthday in 2020.