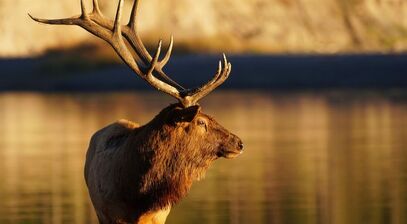 The Nature Conservancy -Landmark Wildlife Conservation Bill Clears U.S. House Recovering America’s Wildlife Act would invest billions in state, local and tribal conservation efforts June 14, 2022 | Arlington, VA
Dear WGC Conservation Committee,
On June 14, the House of Representatives passed the Recovering America's Wildlife Act (“RAWA”) with a bipartisan vote of 231-190. Many thanks to all of you who reached out to your Representatives. As always, your personal efforts made a real difference!

The next step is for the Senate to take up the bill, and a vote may come within days. We are confident that President Biden will sign the bill into law, which means that the passage of this critical legislation is just within reach! The GCA has been advocating for this bill for over six years, and we hope you will pitch in to help get it over the finish line.

“RAWA” will provide $1.3 billion annually, to support wildlife conservation strategies in our states, territories and tribal lands. It will prioritize, “innovative recovery efforts for species of greatest conservation need–that is, those listed as endangered or threatened. This includes the native plants that grow in the habitats of these species; a provision that the GCA was instrumental in drafting, and stewarding, as the bill made progress over the years.

I found it easy to copy and past the below suggested text from GCA NAL Chair in an email to Senator Toomey.   In the letter that I sent to Senator Bob Casey, I thanked him for Co-sponsoring this bill and hope that he would press to have a vote on it in early September.    The GCA has been working on this bill and its inclusion of support for native plants for the last six years!!  It does not take alot of time to contact our Senators and this outreach does make a difference.


Thanks   Carolyn and Kris

Date
Dear Senator X (or staff member’s first name]:
I write as a constituent, a Garden Club of America club member and a supporter of our country’s wildlife, native plants, and healthy ecosystems, to ask (Senator X or “you”] to vote in favor of the Recovering America’s Wildlife Act (S. 2372). This historic legislation, which recently passed the House, amends the Pittman-Robertson Act to provide states, territories, and tribes with more than $1.3 billion annually, catalyzing efforts to restore essential habitat and implement key conservation strategies, as described in their Wildlife Action Plans.
America is blessed with a plethora of diverse species of plants and animals, but over one third of them are threatened with extinction. “RAWA” protects both our wildlife and the healthy ecosystems that support them, ensuring the continuance of life-sustaining biodiversity.
The successful passage of this critical legislation will benefit generations to come. Thank you for considering this request and safeguarding a healthy future for plants, wildlife, and our citizens.
Sincerely,
Your name
Local garden club
Home address